…thanks to the Potential Airship. I’d like to own a gorgeous library in my dream mansion!

Skulduggery Pleasant is a very nice YA Urban Fantasy series mostly set in Dublin, Ireland that I have discovered a few months ago, thanks to a friend. I have only read the first three books so far, so I don’t know what happens next to the characters or to China’s Library. China Sorrows is very powerful and collects objects and books. In the first book, the library is described as an entire floor stacked with a maze of bookshelves and an open space at the centre.

Edit from 2015: read the entire series. It’s great. The choices the protagonists have to make will change their life forever. Some moments are either beautifully hopeful or fascinatingly horrific, to a point which is rarely reached in YA literature.

When I was very young, I liked Beauty and the Beast and especially the settings. The library that the Beast gives to Belle is really awesome: spiral staircases, floor-to-ceiling shelves and windows, a fireplace and a dome! As a bookworm, I can understand Belle’s glee!

When I was 10, Casper was probably one of my favorite movies. I loved the Art Nouveau inspired enormous mansion, the library with iron staircases, and an armchair TRAIN! And a nice ghost! Come on! Awesome indeed. 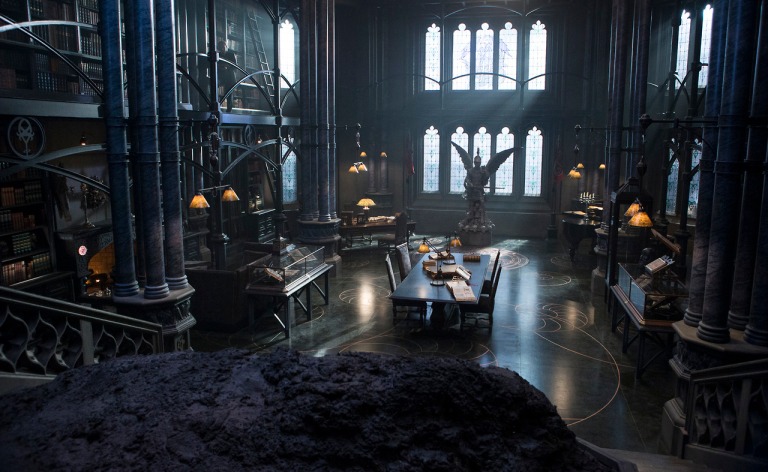 The Mortal Instruments is a YA urban fantasy series set in New York. I am not the biggest fan of the movie adaptation, but they managed to create a beautiful setting for the Shadowhunters New York Institute, especially the library: 19th century charm, in addition to angels and magic. The railings and windows look great and I also need some display cabinets in my dream library now that I think about it.

American McGee’s Alice is an amazing game, with a dark wonderland atmosphere, and awesome music. One of the scenes inside the “Skool” is the “Library of Pain”, where Alice must fight her way through high bookshelves. Then the library ends up in void, with floating stacks of books.

When I first discovered this game, I fell in love with the Dark L.A. in which this game takes place. I played the game 7 times, feeling like I was going home each time I wandered in the gloomy streets. One of my favourite settings in the game is Grout’s mansion, probably thanks to the impressive Victorianish library that contains books but also secret ways to open doors somewhere else. (Oh and crazy zombies… Well…)

Hogwarts library feels warm and cosy, but also a bit dangerous: it is quintessentially British, amazingly beautiful, but also full of books about magic – and books that can bite. The location chosen for the movies is the Bodleian Library, in Oxford – I love Oxford. Which is also a favourite setting in A Discovery of Witches by Deborah Harkness, full of witches as well ( and vampires and demons).

3- Scriptorium and Library in the Name of the Rose, Umberto Eco, 1980 and movie adaptation, Jean-Jacques Annaud, 1986

Umberto Eco is said to have written one of the most accurate fictitious accounts on the scholarly lives of medieval monks (says James Campbell in The Library: a World History). The scriptorium feels real enough, but the library and the tower sheltering it blew my mind when I first saw the movie (yes, I watched the movie before reading the book). The tower is clearly inspired by Piranesi’s Carceri d’Invenzione.

The library itself is a dark maze containing weird books and is really huge. Someone (op. cit.) found out that if the library were real it would contain about 85000 books.

2- The Cemetery of Forgotten Books in The Shadow of the Wind, Carlos Ruiz Zafón, 2001

This book is one of my favourite reads, featured in a previous article. The Cemetery of Forgotten Books is not a cemetery though, but rather a secret library in Barcelona. In the first scene of the book, the fascinated main character, Daniel Sempere, discovers this place and must pick one book in the library, as customary for a first visit. He chooses the Shadow of the Wind by Julián Carax and the adventure begins!

Carlos Ruiz Zafón has created a great music score for his book, one is called Cemetery of Forgotten books.

1- The library in Silence in the Library/Forest of the Dead, Doctor Who Series 4, Steven Moffat, 2008

OK so this one won’t probably be a big surprise as I’m fond of Doctor Who but what is the point? These episodes are awesome and the library – when rid of Vashta Nerada that is – is amazing: the whole planet is a library.

Some real settings include the Old Swansea Central Library and the Brangwyn Hall in Swansea, Wales. 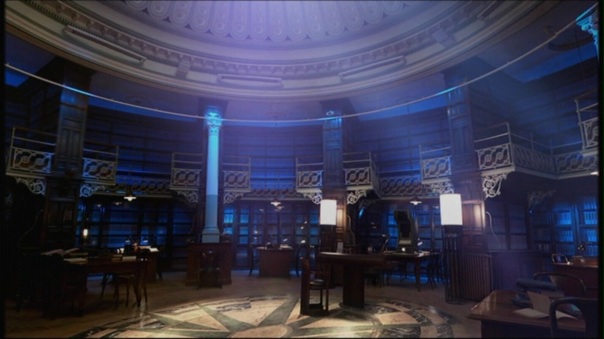 (Yes, my first choice required this profusion of pictures.)