As I like to write seasonal articles, and I wanted to make a new list, here are some time travelling Valentines!

This novella follows Théophile Gautier’s well-known trope: a contemporary young man who falls in love with a dead person from the past. Here, Octavien visits Pompeii, but at some point he’s in the old Pompeii and falls in love with Arria Marcella. However her father gets angry and we find out she’s a ghost who likes to ensnare young men like Octavien. At the end, we don’t know if it was dream or reality, and it’s more a ghost story than a time travel one, but the protagonist does wander in an old Pompeii with the same awe as if he’d really time traveled, so I added it to the list.

Love: One-sided
Time travel: Touch only with your eyes

This wonderful novel by Daphne du Maurier dwells into drug induced time travel. The hero can enter into the Middle Ages version of his Cornish landscape, and see what was happening in the 14th century where he’s currently walking. He is the mute witness of the lives of medieval people, and falls in love – quite a one-sided experience! – with Lady Isolda. But this time travel thing can be dangerous… I highly recommend reading this book!

Love: Tragic
Time travel: One of them does :p

Captain Jack Harness is a bisexual time traveler whose affair with Ianto – and its tragic ending – has moved Torchwood fans a lot. The whole series 3 is actually very moving, even traumatizing, but so very excellent !! One of my all-time favorite seasons. Diana and Matthew’s love story can be a bit annoying sometimes, Matthew is a paternalistic, over-protective centuries-old vampire and Diana is a witches who doesn’t use her powers, at the beginning. However I do like those books, they are entertaining and Deborah Harkness – no relation whatsoever with Captain Jack Harkness 😉 –  does know her history: she’s a history professor and has written scholarly books about Elizabethan England. She’s also a very nice person – I’ve met her in Paris two years ago. At the end of A Discovery of witches, Diana finds out she can – and must – time travel to Elizabethan Europe, so she brings her husband Matthew with her. Shadow of the Wind is set in France, England and Prague in the 16th century. The third book will be out this summer.

A very emotional Torchwood episode, where Captain Jack Harkness meets in 1941 the man who gave him his name… Sensual dances and kisses as a temporary respite in the middle of the war… Beautiful.

Love: Sad (well, it’s… you get it)
Time travel: Cardiff Rift For the win, again

A 1953 aircraft lands in nowadays Cardiff through the Rift (what else?). The pilot, Diane, begins an affair with Owen. He finds out he’s in love only to see her attempt to go back through the rift… It was a very beautiful episode, and the other time travelers were very interesting too.

This is the first Doctor Who entry – be prepared for some more! In this great two parter, the Doctor has forgotten he’s time lord. He lives with Martha in pre-WWI Britain, as a teacher. He falls in love with Nurse Redfern. The ending is sad, even if we’re glad to get the Doctor back! This very entertaining movie features Bill Murray as a grumpy arrogant TV presenter who needs to cover the Groundhog Day on TV. His day feels like hell and when he wakes up, it’s Groundhog day again. And again and again… He finds out he’s in love with co-worker Rita and needs to seduce her to be able to end the time loop… The love ethics are a bit shady in my opinion, but the comedy – and other – situations are just awesome. I highly recommend this movie.

White Tulip is one of my favorite Fringe episodes – Fringe being one of my favorite series. The double narration is really cleverly written. Alistair Peck wants to save his fiancée, Arlette, who died in a car accident. So he keeps going back through time to try to save her. But he might put a lot of people lives in danger and Walter Bishop warns him… The second arc of the story is related to Walter trying to tell his son where he’s from, and looking for God’s forgiveness… The end is just overwhelmingly beautiful and emotional and is echoed in the series finale.

An all-time favorite, this Doctor Who episode just abounds with love, timey-wimey, steampunk robots and magic. The alchemy between David Tennant and Sophia Myles just makes this love story all the more believable. Now I’m kind of fascinated with Madame de Pompadour and squeak mentally each time I see her picture in a museum. This episode is quoted in Her Fearful Symmetry, a book by Audrey Niffenegger whose excellent The Time Traveler’s Wife is said to have inspired Steven Moffat into writing River Song’s story arc in Doctor Who. 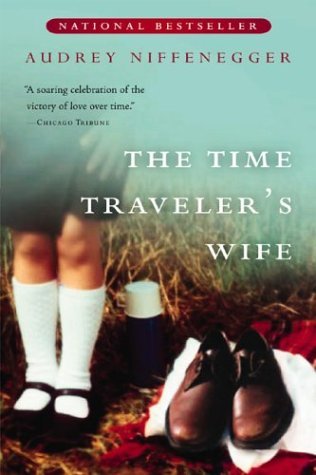 And then as advertised just before, here are the two heroes of the Time Traveler’s wife, Henry and Clare. Henry has a genetic condition: he travels through time, between his birth and his death. He meets his wife after she met him, and they struggle getting their dream life while he can disappear anytime without wanting it to happen. So the weird assessment comes from the parts when Clare is a child, but really it’s a very good story and it’s probably one of my favorite books. The predestination paradox is greatly embraced here, the heroes live in a consistent universe and they can’t make things happen in a different way. The possibilities of the plot are really well capitalized on. There is a movie but I haven’t seen it yet.

Allegedly inspired by previous mentioned the Time Traveler’s Wife, River Song and the doctor are both time travelers, and they keep on meeting backwards. The first time they meet, in the awesome two parter Silence in the library/forest of the dead, we don’t know who River is, but she knows the doctor. She happens to be the daughter of his travelling companions Amy and Rory, and they get married in series 6. Her last-to-date appearance as a ghost in The Name of the Doctor was moving.

Misfits is a very good British TV series which portrays young offenders getting super-powers and not being really hero-like – except when they are. Often dark, the concepts are really well developed and the love story arc between Alisha and Simon over two seasons is well written and moving. At first, Simon seems really shy and clumsy, clever in a nerdy way, while Alisha is a beautiful girl who likes to go out with not so bright, beautiful guys.
In series 2 Alisha stumbles upon the lair of the mysterious hero seen previously in the series. This guy is actually future Simon, and  he’s much more confident and sexy than present Simon. The actor, Iwan Rheon, is just brilliant as both characters! And Antonia Thomas is such a good actress too, which serves well the plot. I guess that judging from season 1 nobody would have bet on a love story between them. Alisha falls in love with future Simon, but something happens (I don’t want to spoil too much!)… Alisha begins to fall in love with present-Simon, who progressively becomes the future Simon we’ve seen…

The fourth Doctor Who entry, Rose Tyler and the Doctor! I really like their story – as can be understood from reading this blog – that grows beautifully over the episodes, and ends in tears in Bad Wolf bay. The second ending in Series 4 is very emotional too. This is the fourth doctor who entry, each featuring the Doctor, but Rose Tyler is the 10th Doctor great love and their story will be remembered 🙂

“Hand”, the human Doctor, and Rose