Airships are well-known tropes as symbols of parallel universes. Often used in steampunk fiction, but not only, I just love them and like to see how creators use them in their fiction.

Some articles say more about airships in fiction, and Ian Mc Donald, author of the great Everness series, has written about his love for airships and fantasy/science fiction fictional airships.

Airshipscape – Welcome to the multiverse

In TV shows Doctor Who and Fringe, Airships are mostly used to portray in one second a recognisable alternate universe landscape. I like those landscapes. 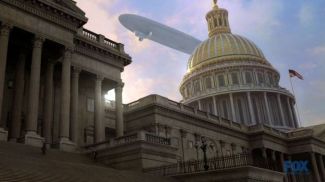 In other stories, airships are more than a landscape: they are flying, impressive settings, ready to host some breathtaking scenes. Here are some favorites of mine:

Miyazaki loves airships and steampunkesque settings. In Kiki’s delivery service, an airship is impressing eveyone in town but has an accident while Kiki’s friend is in there, and… no spoilers.

There are a few Airship scenes in this awesome game – levels where you need to fight obviously, and they suit the lighter than air feel of Columbia city.

The Glass Book of the Dream Eaters, Gordon Dahlquist, 2006

This fascinating novel, following three main characters with seemingly nothing in common, through their attempt to beat a dangerous cabal. The Victorian-like setting, and the convoluted language are not incompatible with airship scenes – and indeed there are some James Bond – gone  – Victorian ones and the dramatic finl scene also takes place in an airship…

(and did I mention the next books of the series are good too?)

Watchmen is set in an alternate world where super heroes helped USA win the Vietnam War. In this version of the 1980’s, the USA and Russia are on the verge of nuclear war. One of the vigilante, Nite Owl, owns an airship called Archie he hadn’t used for years when the his services seem to be required again.

The Ariel, in Aurorarama, Jean-Christophe Valtat, 2010

A few years ago I researched Polar Steampunk as I loved the mix between Steampunk, Ice and Northern lights that Philip Pullman had created in His Dark Materials. I found two books: Karin Lowachee’s Gaslight Dogs – still on my increasing to-read stack – and Aurorarama, set in a Polar alternate 1908 New Venice. The setting was indeed magnificent, and the story strangely fascinating. And the Ariel was there, an airship led by Anarchists…

Girl Genius is a Steampunk webcomics. Castle Wulfenbach is a giant airship, a city perpetually floating over the world…

And then, in some cases airships seem characters of their own, they have names – they might even give them to the series itself, are the main setting, and are loved by “their humans”… Some picks:

In Etiquette and Espionage, as well as in Curtsies and C0nspiracies – which are YA prequels to Gail Carriger’s steampunk series the Parasol Protectorate – the main setting is the Academy, were the Finishing School is. Sophronia, the main character, learns her ways around this airship, which begins to feel like home.

Abney Park is an amazing Steampunk band and they have created a world around themselves, in their songs, but also in role playing games and Robert Brown’s books The Wrath of Fate and Retrograde.

The time traveling crew’s airship is called Ophelia and feels like another member of the band.

My favorite airship so far is the Everness. Ian McDonald’s YA series Everness – Planesrunner, Be my Enemy, Empress of the Sun – has grabbed my attention and won’t let it go. There are some clear references to His Dark Materials, and great ideas about possible parallel universes. Even if there are some incoherences, I like all the quantum physics Ian McDonald threw in and watch anxiously the battles Everett Singh – named after the Multiverse theory’s father – is fighting, for his father, to save the world, but also in his own personality.

Everett Singh is a teenager whose physicist father is kidnapped and sent to a parallel universe. He travels there to find him and gets to live in the Everness airship. The crew members become his friends – well, mostly – and the airship really seems to be a character of its own.