Next on my list of amazing cemeteries I’ve visited: Highgate Cemetery, near London (First cemetery of the tour: Okunoin, Japan). I’ve managed to visit it twice so far: 3 years ago on Halloween, and this summer in August. Most pictures in this article won’t be mine – I couldn’t manage to take enough decent photographs with my damaged phone!

Highgate Cemetery is composed of two parts: the East Cemetery, which is the most recent part, and is quite easily accessible, and the West Cemetery, the oldest part, whose tours are regulated and should be booked in advance – it’s really worth it if you happen to be near London.

For some explanations, I’m indepted to the booklet I bought in Highgate Cemetery in August.

Until the beginning of the 19th century, most burials had taken place in churchyards. But those resting places had become really overcrowded, and soon sanitary issues arose: epidemics, horrible smells… People were also afraid of body snatchers, who took readily available bodies to help in their medical studies.

Soon, the decision was taken to open privately run cemeteries in the outskirts of London, with the Père Lachaise in Paris as a model. Since funerals were such grand affairs in the 1800s the new cemeteries would display jaw-dropping monuments and become beautiful landscape gardens.

Highgate Cemetery West is only 7 ha, but David Ramsay, Highgate’s landscape architect, managed to make it look much bigger.

In the middle of the 19th century, the East Cemetery was opened to answer the increase in burials. However, later on, people were soon tired of being reminded of death, they stopped visiting the cemetery or building impressive monuments. In 1960 the much declining cemetery was closed, and became a kind of natural reserve, with ivy-clad crumbling tombstones, much different to what it once was.

In 1975, a charity, the Friends of Highgate Cemetery, bought the grounds and since then they aim at preserving the flora and fauna which had developed in the cemetery, but also at preventing monuments from collapsing further and repairing some of the damaged memorials.

The greenery mingled with beautiful monuments makes this place a very special one.

The Friends of the cemetery try to find a balance between preserving monuments and preserving the nature which had developed, sometimes damaging tombs like the sycamore roots. When the sycamores die or are removed, they are replaced by local species like oak. 18 species of butterflies and 50 species of birds can be seen in the cemetery, as well as foxes, hedgehogs… Insects also find an unusual but efficient home on the tombs and some can feast on the cemetery’s mushrooms.

An orb weaver spider, which hadn’t been seen previously in London and requires total darkness and dampness, was found in 2012 in some vaults and the colony might be of about 100.

Some symbols were very fashionable in Victorian cemeteries, and people could often choose sculptures and statues out of books, which might also explain why similar shapes can be found recurrently throughout the West Cemetery.

Some selected symbols before we dwell deeper into eerie and dreamy Highgate:

While angels looking upwards symbolised resurrection and the soul ascending to heaven, this angel looking downwards represents loss and mourning.

Crosses were not widespread before the 19th century, since they were considered a Catholic symbol. However, they became popular after, as well as Celtic crosses.

Hourglasses represent the passage of time.

Pelicans were a symbol of sacrifice since they were believed to feed their young on their blood, as Musset describes metaphorically in his Nuit de Mai (French).

Inverted torches were a representation on an extinguished life, while the flame portrayed the eternity of the soul.

Urns symbolised the soul, the drape embodied the partition between life and death, thus half-draped urns ensured the soul could escape to  heaven.

The Chapels and the Colonnade 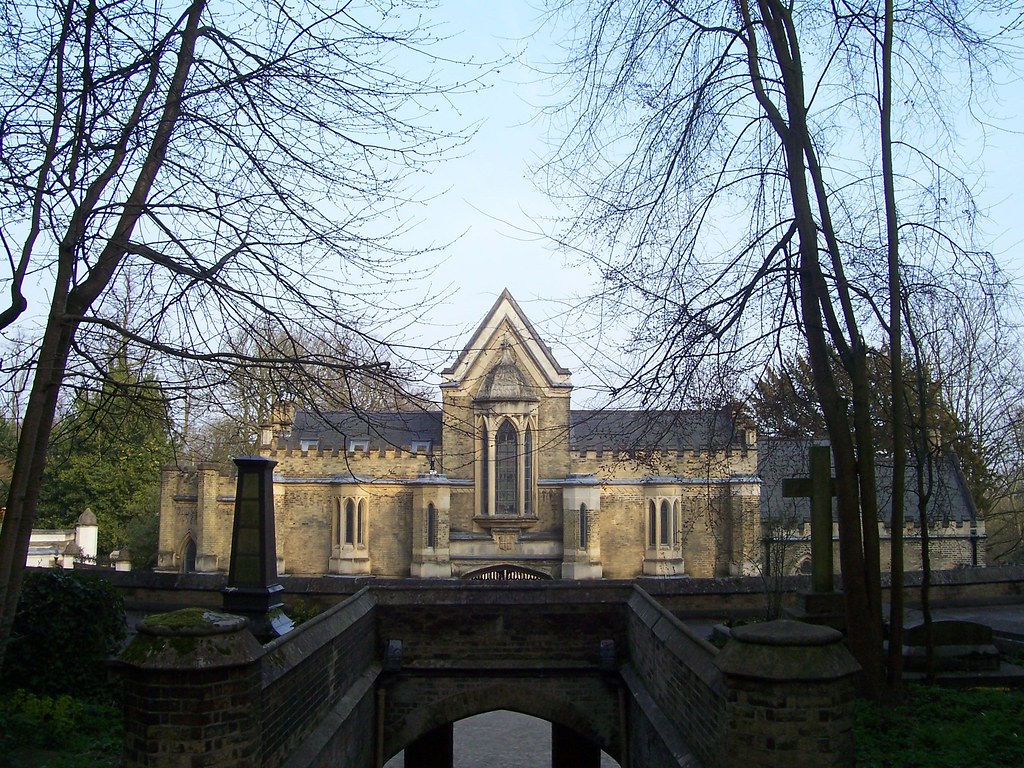 The cemetery’s entrance is a pair of Tudor-Gothic Revival chapels and was listed in 1972 by English Heritage. A restoration of the interior was completed in 2012.

The chapels lead to a huge courtyard, where a coach and horses could turn around. It is surrounded by a dramatic arcade, called the Colonnade.

The Egyptian Avenue can be reached after a short walk uphill, from the stairs behind the colonnade. Appealing to the Victorian taste for Egyptian imagery, this now avenue once was a corridor, but it lost his roof. 8 private vaults line the avenue, their doors decorated with inverted torches. 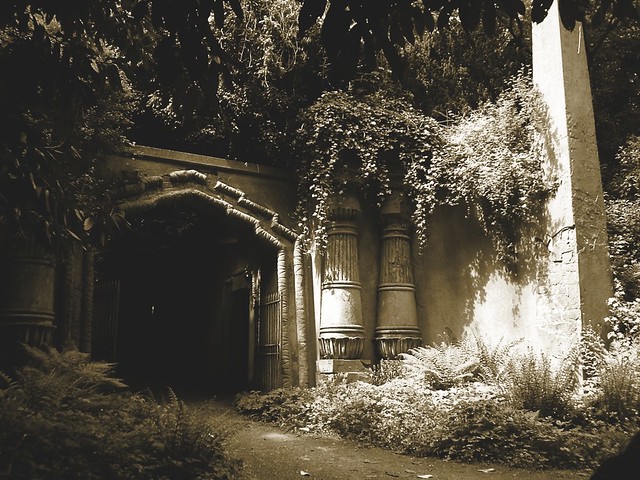 The Circle of Lebanon The Egyptian Avenue leads straight to the Circle of Lebanon, the heart of the cemetery. The cedar tree in the middle was already there when the cemetery was created, and the architecture around it is cleverly done. The circle is comprised of 20 chambers, which were so popular than 16 other vaults were built in front of the older ones.

Terrace Catacombs and the Beer Mausoleum

Above the circle of Lebanon, the catacombs are the highest construction of the cemetery. 73m long, they enclose 825 recesses.

Another high monument is the Mausoleum built by Julius Beer for his daughter Ada Sophia who died in 1875 at 8.

Usually the guides leading us on a tour are very interesting and provide visitors with a wealth of information and anecdotes, tragic, funny or strange, notably about some of the most famous or unusual inhabitants of Highgate Cemetery.

He owned a travelling menagerie and wanted to have a statue of his lion Nero on top of his grave. He also had his coffin made out of timber from the shipwrecked Royal George, and exhibited it when he was still alive.

Another animal here: Tom’s dog. Tom Sayers was a bare-knuckle prize fighter and 10 000 people might have attended his funeral, one of the largest one in Highgate. The dog, Lion, had his own carriage just behind the coffin as chief mourner. 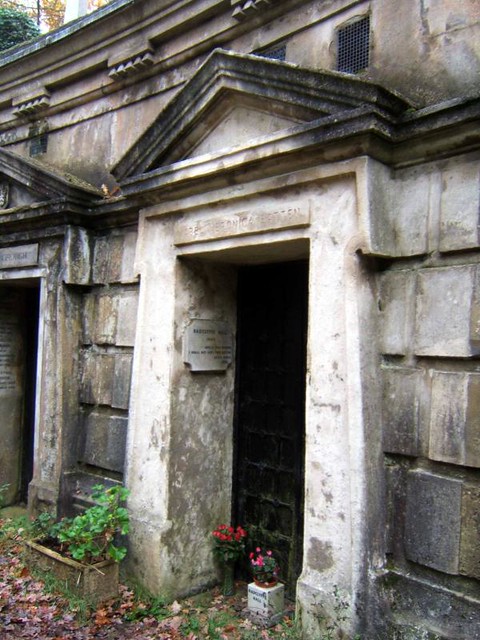 Radclyffe Hall, poet and novelist, whose book The Well of Loneliness was first banned for lesbianism, is buried in the Circle of Lebanon with her partner Mabel Batten who died in 1916. The vault is the only one to be still regularly provided with fresh flowers. 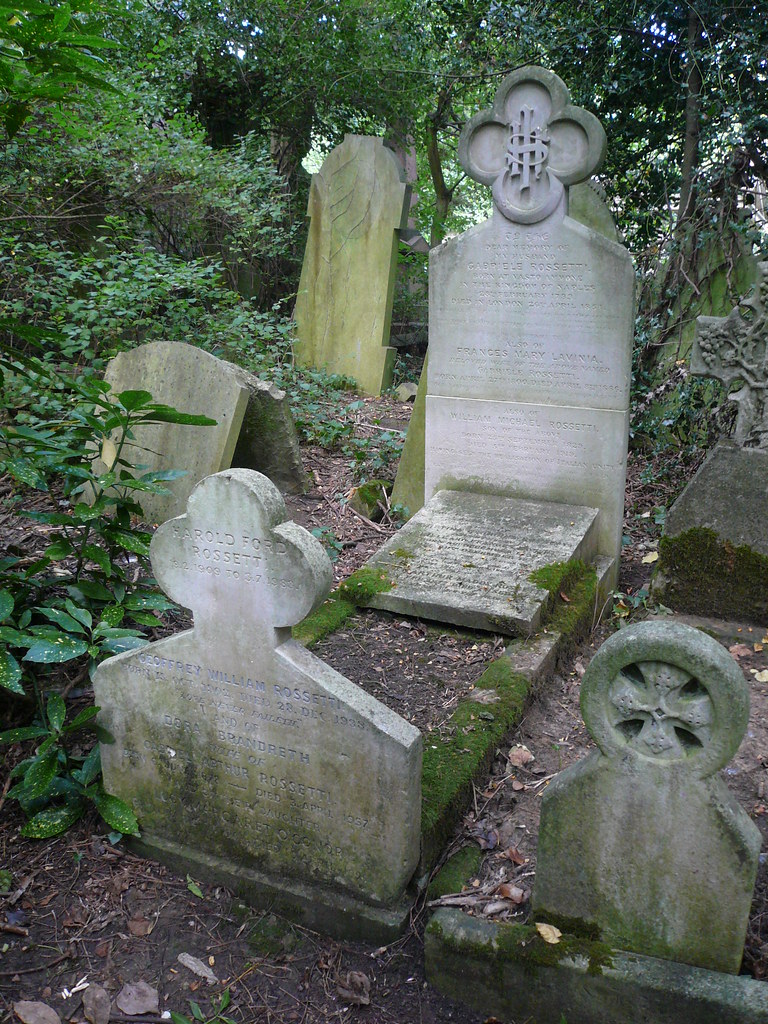 I’ve always been an admirer of the Pre-Raphaelite Brotherhood so I was thrilled and moved to be able to see this grave – which is not officially part of the tour, but since we were interested, we were able to see it. While the famous painter Dante Gabriele Rossetti is not buried here, here lay his father Gabriele (1783-1854), his brother William (1829-1919), his sister Christina (1830-1894) and his wife Elizabeth Siddal (1829-1862).

Christina Rossetti is a poet who wrote Goblin Market in 1862, among other works.

Elizabeth “Lizzie”Siddal was the muse and model of many painters such as her future husband Dante Gabriele Rossetti or John Everett Millais. She died of a laudanum overdose.

Michael Faraday, famous English scientist, and his wife are buried in the Dissenters area since he wasn’t Anglican. Faraday worked notably on electromagnetism.

Highgate Cemetery always oscillates between the eerie, the beautiful and the melancholy. Many artists were inspired by it, even if nowadays you need to ask the Friends of the Cemetery before representing it in your artworks – indeed, controversial as it might be, they want to ensure the cemetery, its inhabitants and their families are respected.

I had already talked about most of the following books in my article The Graveyard Scene, since they are in turn an inspiration for many people.

While Bram Stoker has been rumoured to have used Highgate as an inspiration for Lucy Westenra’s cemetery in Dracula, it is never actually mentioned.

But it appeared in some Hammer adaptations, before the cemetery was bought by the Friends. However, they accepted that part of Dorian Gray, a 2009 movie based on Oscar Wilde’s the Picture of Dorian Gray, would be shot in the cemetery. This is not a very faithful adaptation of the book – it was not supposed to be, but it is visually striking.

It’s also the main inspiration and background of Tracy Chevalier’s novel Falling Angels, 2001, a tale about two families reflecting the changes happening at the beginning of the twentieth century.

Another book mostly takes place in or around Highgate Cemetery: Her Fearful Symmetry, by Audrey Niffenegger, 2009. To research her book, the writer acted as a tour guide for the cemetery. She wrote about two American twins who come to London after their aunt dies and gives them her flat. But it soon appears the aunt, buried in Highgate, is now a ghost… While not as obviously as in Audrey Niffenegger’s book, Neil Gaiman’s The Graveyard Book, 2008 also takes its inspiration from the cemetery. It’s basically the Jungle Book, but in a graveyard, and it’s a very compelling, haunting read.