A year ago, I had the privilege to attend a lecture by J. Kevin O’Regan, ex-director of the Laboratoire de Psychologie de la Perception at the Université René Descartes, Paris 5. In his book, Why Red doesn’t sound like a bell, J. Kevin O’Regan writes about consciousness and feel in a new way. The first part is about the feel of seeing.

Why do we think we see “everything” in front of us whereas our eyes are not that good? Is it because the brain provides us with a fully corrected representation? No, J. Kevin O’Regan says.

(Please note most references to and quotes from J. Kevin O’Regan are from Why Red doesn’t sound like a bell, 2011, Oxford University Press. Please also note some additions are on my own initiative, like the silly pictures, the Mantis Shrimp, the airships or TeamLab’s concept. All mistakes are my own.)

END_OF_DOCUMENT_TOKEN_TO_BE_REPLACED

Quantum entanglement is mind blowing. Einstein, who was troubled by quantum physics’ implications, called it “Spooky action at a distance”.

Sometimes, particles are not independent from each other, the quantum state belongs to the whole system. Those particles might stay correlated even if they are at opposite ends of the universe.

Let’s say our system is a pair of particles. Those particles are quantum airships which can be English or French airships, but the whole system should be in English and French.

If one observer looks at airship A, airship B’s state will then be fixed instantaneously. For instance, if airship A is observed as French, airship B will automatically be English. But if airship A is observed as English, then airship B will be French… Some try to explain it with hidden variables: in this case, it’s obvious airship B is English if airship A is French, because observers know the initial state is both English and French. However this airship example is an over-simplification. Experiments like the one made by Alain Aspect tend to say there are no hidden variables in quantum entanglement… Spooky!

In real life experiments, an observer would not be able to tell B’s state for sure, without A’s observer telling them the result – and this information can’t travel faster than light according to the theory of relativity.

It is so spooky it has inspired a lot of plot devices, which are not always scientifically accurate, as quantum entanglement is often used as a way to teleport information – that said, with extra worm holes, the plot’s physics gets blurry…

END_OF_DOCUMENT_TOKEN_TO_BE_REPLACED 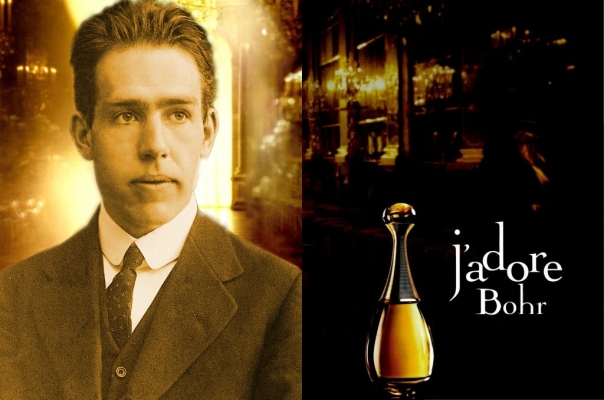 Had some fun with GIMP! Quantum physics for the win! Niels Bohr rocks!