I was watching The Prestige again, by Christopher Nolan, when a character’s name caught my attention: Chung Ling Soo. But why did it sound so familiar? That’s because this character, or similar avatars, appears in other movies or books I read or watched recently. I searched on the internet for more information and found they were all based on a real illusionist, Chung Ling Soo, “the Marvellous Chinese Conjurer”. 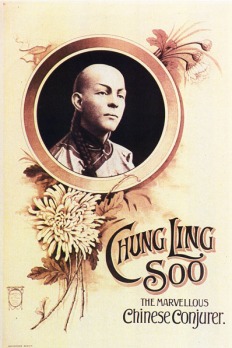 First, Chung Ling Soo was not Chinese. His real name was William Ellsworth Robinson (April 2, 1861– March 24, 1918), and he was an American magician who first called himself Robinson, the Man of Mystery. He then changed his name to Chung Ling Soo and pretended to be Chinese. He never spoke on stage and used an interpreter when answering journalists.

Here is the only footage of Chung Ling Soo we’ve got left, showing him greeting soldiers in 1915 at a benefit performance:

More about him here: http://www.history.com/videos/the-secrets-of-chung-ling-soo

One of his tricks consisted in producing a huge bowl full of water out of an empty cloth, and then pulling a child from the bowl.

This trick was very popular and Edison created a movie in 1900 named Ching Ling Foo undone, to try mimicking Ching’s trick with a camera:

For advertisement’s sake, in 1898, Ching offered a reward to anyone who would reproduce his trick. Robinson wanted to try but Foo rebuffed him. Later on Robinson decided to become Chung Ling Soo and a rivalry was born.

In The Prestige by Christopher Priest, a novel from 1995, magician Alfred Borden tells us how he watched one Ching Ling Foo’s magic show in London. In Christopher Nolan’s movie, the one I was watching yesterday, the name of the magician has been changed to… Chung Ling Soo!

The magician performs a trick similar to the real Ching Ling Foo’s, but with a huge water bowl full of fishes. Borden finds out how the magician does it: he hides the bowls under his Oriental -looking robes, pressed between his legs. But the old Chinese man always appears so weak and frail, limping heavily… The bowl is so heavy that one must be really fit, and cannot but limp when walking with the bowl between the legs… A fit man would give his secret away, as the sudden limping on stage would seem strange and inappropriate. That’s why Borden is convinced the illusionist is faking to be weak even when off stage. His tricks and secrets are ruling his whole life. Borden makes a parallel between the Chinese magician’s dedication to his art and his own secret – one we learn at the end of the movie.

Chung and Ching’s rivalry can also be compared with Borden and Angier’s hatred. The former feud became public in London in 1905, as each claimed to be the “Original Chinese Conjurer”. Ching Ling Foo challenged Chung Ling Soo but he did not come.  Some sources say this rivalry might have been faked for publicity purposes.

Chung Ling Soo was a debunker – he wrote Spirit Slate Writing and Kindred Phenomena in 1898. The book, which you can read thanks to the link above, exposed the tricks fake mediums would use. He was not the only magician who tried to debunk so-called spiritualists or mediums, Harry Houdini was one of the most famous debunkers for instance. The goal was to fight some mediums who said they had real powers and took money from grieving families in exchange for delusive ways to communicate with the dead.

In Magic in the Moonlight, a movie by Woody Allen (2014) set in 1928, Stanley Crawford is a British stage magician performing as … Wei Ling Soo. The name and stage persona are clearly inspired by Chung Ling Soo.

I didn’t mention Magic in the Moonlight in my article about circuses and magicians, since there were lots of references, but it would have fitted right in the “Duelling Magicians” category. Indeed, Crawford is hired incognito  to debunk a young American woman, Sophie Baker. She claims to be a mystic and is being paid by a rich American family living in the French Riviera to contact the dead father. Crawford is a fervent reader of Nietzsche and an atheist, and at first he is convinced that Sophie is a fraud that must end up in jail. However, she seems to know a lot about him – she debunks him in turn as Wei Ling Soo – and he can’t find her tricks…

One of Chung Ling Soo’s tricks went wrong, though, his most famous one which was called “Condemned to Death by the Boxers”.

The magician’s assistants would take guns on stage, some members of the audience would mark the bullets destined to be loaded into the gun, then the attendants would fire at the illusionist, but he would pretend to catch the bullets in the air and drop them on a plate. Of course, the bullets were the marked ones. The guns were actually tricked so that they wouldn’t fire, and an assistant would give him the marked bullets secretly.

But on this fateful day of March 23, 1918, as Chung Ling Soo was performing at the Wood Green Empire theatre in London, one of the guns did fire and Chung Ling Soo was hit in the chest. For the first and the last time, he spoke English on stage: “Oh my God. Something’s happened. Lower the curtain.” He died the day after.

The death was judged accidental, since Chung never unloaded the guns properly to save money. But other sources claimed it might have been a murder or a suicide. Indeed, someone who could access the guns just before and put a button or a bullet inside would endanger the magician’s life.

In The Prestige, Borden’s fingers are lost to such a trick. While he performs the “Catch the Bullet” trick, Angier, his enemy, who knows the trick, manages to volunteer and shoots him.

A story from 1947 claims that Chung Ling Soo had a mistress, beautiful Estelle, one of his admirers who lived in Hampstead Heath, and that Chung received a note saying that he should be careful, since his wife had access to the guns… But soon Estelle married someone else and left, and the story implies that Chung had committed suicide. However the facts seem to have been stretched a bit since the note was not mentioned before and a gun expert explained the accident.

His wife, Olive Path or Dot, was impersonating Suee Seen – Water Lily – and was indeed on stage with her husband.

In one of the books I’m reading, a French novel called L’Île du Point Némo – The Island of the Pole of Inaccessibility – by Jean-Marie Blas de Roblès, 2014, Chung Ling Soo appears again.

This intricate novel is very interesting so far. It begings with a steampunk story, full of references to 19th century writers, and whose protagonists are Martial Canterel – a clear reference to Locus Solus by Raymond Roussel, John Shylock Holmes – less observant than his ancestor, Grimod de la Reynière – Holmes’s butler – and Miss Sherrington, among other colourful characters. But actually, this story is a story within the story, since it has been invented by Arnaud Ménestre, a former cigar producer whose factory has been bought by an E-reader manufacturer. I learnt that in some cigar factories, especially in Cuba where it is a century-old tradition, books are read to the workers to help them roll the tobacco leaves. In the book, Arnaud says it had been decisive in Cuba’s fight for independence. He tries to perpetuate this tradition by reading his story day after day to the E-reader factory workers, whose lives we also get a glimpse into.

In the book within the book, our steampunk heroes are trying to find who stole Lady MacRae’s diamond. The quest leads them to the Wood Green Empire in London, and they watch… Chung Ling Soo’s performance. The story is really similar to the real Chung Ling Soo’s death, until the mischievous Blas de Roblès puts less dignified words in Chung’s mouth: “Ça a merdé, putain ! Baissez le rideau ! Baissez le rideau, je vous dis ! ” (“It’s screwed up, damn it! Lower the curtain! I say, lower the curtain!”)
Then there are more differences. Chung Ling Soo dies on the spot and appears to be one-legged. The protagonists think he has been murdered to hide the secret of the diamond’s disappearance. They soon find a message on a strip of cloth. They have to wind it around Chung Ling Soo’s wooden leg to decipher it and they end up on the Trans-Siberian Railway…